During the first half of the twentieth century, Joseph Pilates, developed a system of exercises intended to strengthen the human mind and body. He believed that mental and physical health were interrelated. His father was a prize-winning gymnast and his mother a naturopath and in his youth he had practiced many of the physical training regimes available in Germany, and it was from these he developed his own method.

Breathing is important in the Pilates method. He saw considerable value in increasing the intake of oxygen and the circulation of this oxygenated blood to every part of the body. This he saw as cleansing and invigorating. Proper full inhalation and complete exhalation were key to this. He advised people to squeeze out the lungs as they would wring a wet towel dry. Pilates breathing is described as a posterior lateral breathing, meaning that the practitioner is instructed to breathe deep into the back and sides of his or her rib cage. When practitioners exhale, they are instructed to note the engagement of their deep abdominal and pelvic floor muscles and maintain this engagement as they inhale. Pilates attempts to properly coordinate this breathing practice with movement. 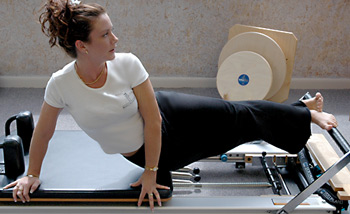 Pilates demands intense focus, the way that exercises are done is more important than the exercises themselves.

All exercises are done with control, the muscles working to lift against gravity and the resistance of the springs and thereby control the movement of the body and the apparatus.

The center is the focal point of the Pilates method. Many Pilates teachers refer to the group of muscles in the center of the body—encompassing the abdomen, lower and upper back, hips, buttocks, and inner thighs—as the “powerhouse”. All movement in Pilates should begin from the center and move outward to the limbs.

Pilates aims for elegant economy of movement, creating flow through the use of appropriate transitions. Once precision has been achieved, the exercises are intended to flow within and into each other in order to build strength and stamina. In other words, the Pilates technique asserts that physical energy exerted from the center should coordinate movements of the extremities.

Precision is essential to correct Pilates. The focus is on doing one precise and perfect movement, rather than many halfhearted ones. Here Pilates reflects common physical culture wisdom, gaining more from a few energetic efforts than from many listless ones. The goal is for this precision to eventually become second nature and carry over into everyday life as grace and economy of movement.

With increased precision, motion becomes more efficient so there is less stress to perform the exercises.

Practiced faithfully, Pilates yields numerous benefits. Increased lung capacity and circulation through deep, healthy breathing is a primary focus. Strength and flexibility, particularly of the abdomen and back muscles, coordination – both muscular and mental, are key components in an effective Pilates program. Posture, balance, and core strength are all heartily increased. Bone density and joint health improve, and many experience positive body awareness for the first time. Pilates teaches balance and control of the body, and that capacity spills over into other areas of one’s life.